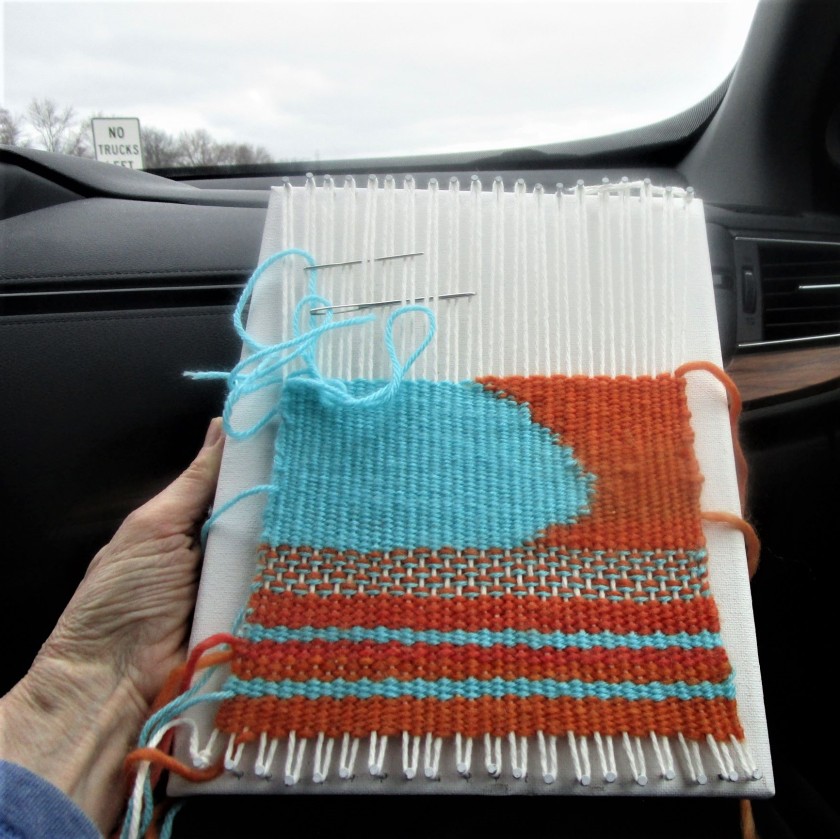 Yesterday we arrived home after spending a week in Wisconsin. The trip was undertaken to help our daughter and her family prepare for a move. It was a weird and wonderful trip. With constant changes implemented by the authorities in the states we traveled through, we never knew what to expect from day to day. Thankfully, many businesses on the interstate highways remained open to provide for the necessities of travelers. All the staff we encountered along the way were both kind and helpful.

The trip was a success. While we stayed with the kids, daughter and son-in-law found and put an offer in on a suitable house in Madison. That’s a big hurdle accomplished.

I discovered a new travel craft – weaving on the little 8 by 10 artists’ canvas loom. All the materials fit into an average size project bag, and the motions of the fiber artist do not ever distract the driver. You see in the photo above my attempt to create an S-curve out of two colors of yarn.

I received two items from daughter that will inspire future fiber objects:

The Vogue Knitting book is a delightful compilation of the best of the Vogue Knitting magazine, from the 1980s through to 2011. Lots of inspiration is here. I have my eye on a couple of patterns found within. Of most value to me are the charts of various lace stitches.

This little book is called omiyage, by Kumiko Sudo. It was purchased by my mom, who passed it to daughter, who gave it to me. The Japanese have a thousand-year-old practice of making and giving small gifts. Back then there were strict rules and a great deal of formality surrounding this ritual. The author re-interprets omiyage for modern times, using fabrics both traditional and modern. As she is a quilter, she pulls fabrics from her stash of quilting cotton, and incorporates bits of silk and wool as well. I plan to try making some Good Luck dolls.

Traditionally these dolls were the focal point for a festival called Girl’s Day. I think they would be wonderful made from some of my hand-painted fabrics. Because they are small, making one should be a fun, inexpensive and quick project.

Well, I am keen to resume my making. The Just Trees mini quilt is still unfinished and I would like to get that weaving off the loom soon.

Until next time, keeping making and be well.

One of six children, I was raised by a busy mom, who instilled in me a love of fabric. Though I learned to sew and knit at a young age, it was the arrival of my first grandchild that pushed me into action. A long-time knitter, I am now ready to explore all things fiber. View All Posts

9 thoughts on “Back Home”